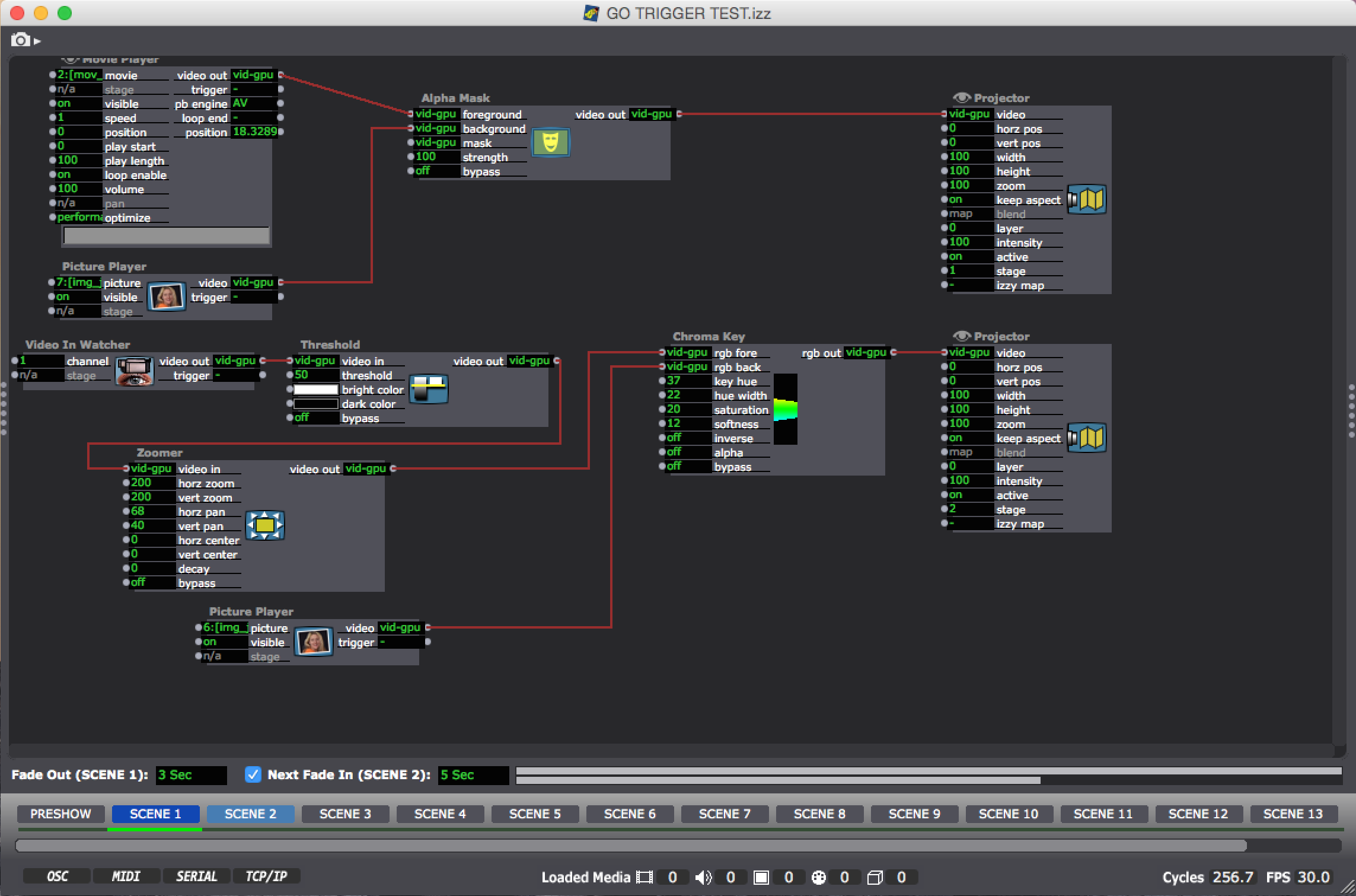 If you are just now coming on board with Isadora 2.2, you should take the time to read the Isadora 2.1 release notes. There are several important crucial tips that will help you get the most out of Isadora 2.2.

Starting with v2.2, the space bar now functions as the "GO" button by default. Pressing the Space Bar on your keyboard will jump to the next scene automatically.

The new Fade Times are integrated into the Scene List view.[/caption]

The "GO" feature works together with the new "Fade Out" and "Fade In" times seen just above the Scene List. Simply enter the time (in seconds) you want for the current scene to Fade Out, and optionally, the Fade In time for the scene immediately following the current scene.

You can re-configure your Go Triggers to suit the needs of your project by selecting "Edit Go Triggers" from the Scene menu. Go Triggers can be activated by the keyboard, connected MIDI devices, or other Human Interface Devices (HID), and can be set to advance to the next scene, go back to the previous scene, send go forward and go backward messages, and to advance the cue sheet. 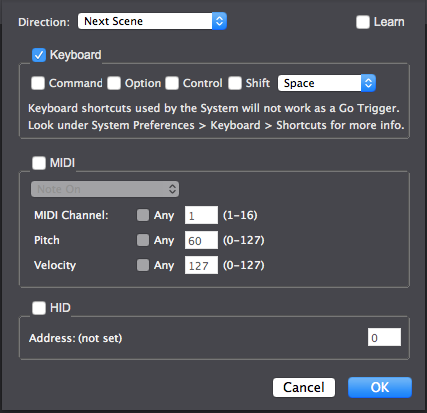 Each scene has its own Fade In and Fade Out times, so it is now possible to create scene transitions with unique cross-fades. You no longer need to manually add a Keyboard Watcher paired with a Jump Actor to create your own "GO" button for every scene.

To disable this new feature, choose "Edit Go Triggers..." from the Scenes menu, ensure the Direction menu says "Next Scene", and uncheck the "keyboard" checkbox.

NOTE: Documents saved with v2.1 or earlier do not automatically enable the Space Bar "GO" function! If you wish you use this feature with documents created in a prior version of Isadora, you simply need to enable by choosing "Edit Go Triggers..." from the scene menu.

Tip of the Day Dialog 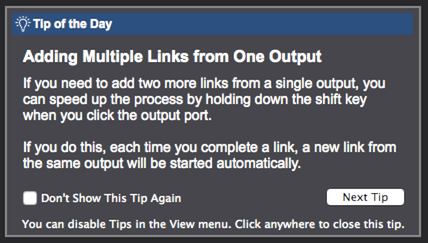 You can disable, enable, or restore any hidden Tip of the Day messages from the View menu.

Get your project running again quicker than ever: a new option in the Isadora Preferences allows you to configure Isadora to automatically open the most recent file on launch.

You can choose to break the serial input data by:

This setting now appears at the bottom of the Monitor Window.

The Isadora 2 Manual is now available. Get it here!

In addition, new tutorials are available through the Knowledge Base:

Isadora 2.2 addresses a critical issue facing users working with Isadora USB Edition where the software would spontaneously revert to demo mode while the USB key was securely connected.

Isadora 2.2 resolves a critical issue where the 64-bit Isadora Movie Player crashes, or performs poorly under Mac OS X 10.8 (Mountain Lion.) These were were caused by issues with the early versions of AVFoundation in OS X 10.8.

Due to a difference in the required calls needed to playback QuickTime movies on Windows, a substantial performance gain has been incorporated into the QuickTime movie playback engine when running under windows.

Windows: Stages are no longer linked to the Main Window

The stage now remains full screen if the Isadora workspace is minimized. This makes the behavior match how stage windows function on Mac, and makes it much easier to work with multiple application windows simultaneously.