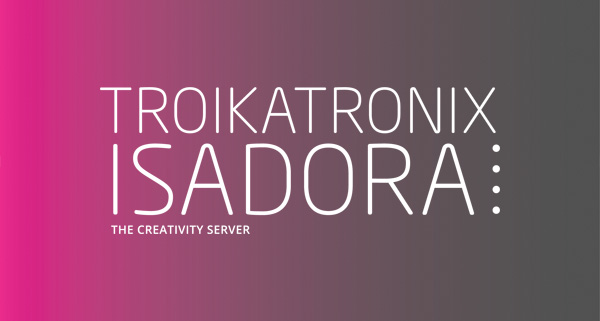 A Thank You to the Isadora Community

This latest release of Isadora was made possible thanks to the amazing feedback, support, and requests of the Isadora Community. The TroikaTronix Team would like to thank all of our users who tried out the new features, provided amazing feedback on the community forums, and followed Mark’s development blog while Isadora 2.6 was under development. A very special shout-out to those who followed this process since we first previewed Isadora 2.6 at the Isadora Werkstatt in August 2017. We hope you enjoy working in Isadora 2.6 on your future creative projects, and we can’t wait to see the exciting new artwork you make with Isadora!

The TroikaTronix tech team is here to provide complimentary e-mail support to Isadora users with an active, up-to-date license. We've recently released a short document which outlines what you can expect from our support team. Click here to see our new Isadora Support Policy.

Starting in Isadora 2.6, when Isadora opens and there is no preference file for the current version, it searches or the most recent preferences version and imports that information into the new preferences file. So, no more need to reset all your preferences each time you update to a new version. Note to users with multiple versions of Isadora installed: Isadora uses highest version number preference file it can find for this import, not the most recently modified one.

Enhancements for Movies with Alpha Channels

Isadora 2.6 includes a new 'alpha mode' input on the Movie Player that allows you to specify whether the movie is 'straight alpha' (unpremultiplied) or premultiplied so that Isadora can handle either one. You can read about alpha issues in Mark’s Blog. 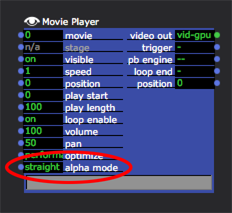 We have a nice addition specifically for Windows users: integrated Spout support!

In fact, these actors are exactly the same as the Syphon Receive and Syphon Stage Output actors which we've had for a while on Mac OS. If you save a patch with these Syphon actors on Mac OS, they'll open up on Windows as Spout actors instead and vice-versa.

There is a new "Show Tagged Actors" button is at the bottom of the scene editor:

What does it do? Well, when you click it, any actor whose name starts with a hashtag will appear in a popup menu. Choose that item and the Scene Editor will scroll directly to that actor, placing it in the top-left corner.

(In case you didn't know it, you can rename any actor by choosing Actors > Rename Actor.)

The Comment actor now supports rich text formatting options to give you better documentation tools within an Isadora project.

(Mark's note: this is the Comic Sans of styled Comment actor examples. It was designed to show off the new feature, so please excuse the kitsch!)

Alongside this new feature is a built-in Font Panel. You can show and hide this panel from Edit > Text Editor > Show Font Panel after you've double-clicked on a comment to edit it.

Isadora 2.6 renames "Audio Files" to "Sound Samples" in the Media view to make it clearer that these files are not intended to be super large. In addition, if you drag in a sound file that is > 128MB, you will now see this dialog which explains why: 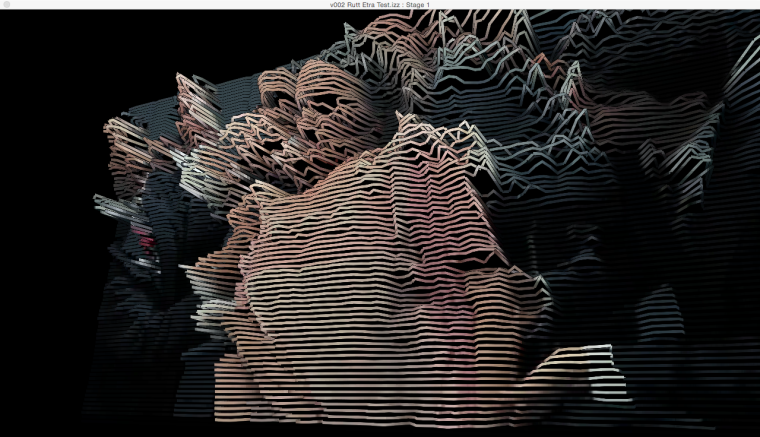 Isadora 2.6 introduces a native plugin that implements the awesome, open-source v002 Rutt-Etra plugin created by Vade. v002 Rutt/Etra emulates the Rutt/Etra raster-based analog synthesizer. Because this plugin is open-source, it is not included with the main Isadora download. You can download the plugin here.

Bill Etra passed away in 2016. He leaves behind long legacy of pioneering both video art and video tools, including the Rutt/Etra Video Synthesizer. Vade sends all donations he receives via the v002 Rutt Etra web page to Jim’s partner Roz. She lives on fixed income and has no surviving family to help her, so every donation made via Vade's page makes a big difference in someone’s life. (You can read more about Bill & Roz at Vade's Rutt/Etra page.)

ArtNet Send and Receive (Download for macOS and Windows)

Isadora 2.6 integrates support for ArtNet communications with the new ArtNet Send and ArtNet Receive actors. Because these plugins use open-source code, they are not included with the main Isadora download. You can get them both here.

Please note, a working knowledge of computer networking is needed to correctly use the ArtNet actors. The TroikaTronix team can’t troubleshoot each and every network configuration, application, and hardware. If in doubt, please hire a professional consultant to properly configure your network and hardware.

One long-requested feature is finished: the new "Capture Stage to Picture" actor.

It complements the existing "Capture Stage to Disk" (renamed now to "Capture Stage to Movie") and "Capture Camera to Disk." All three actors feature new icons, seen above. You can capture the pictures as JPG, PNG, BMP, TIF, and (single frame) GIF files.

Likewise, there is a GPU version of the Lines actor that replaces the old one. The CPU version is now called  "Classic Lines". The new features include a new 'end cap' input that allows flat, square, or round endcaps, a background color input, and a 'classic' input that will cause this actor to replicate the behavior of the old CPU based Lines actor that used QuickDraw for drawing.

Isadora 2.6 includes a brand new actor called OSC Multi Listener. This allows you to capture a contiguous range of OSC inputs. You tell the actor the first channel and the number of channels to copy, and the matching outputs will appear, labeled with the corresponding channel numbers to make it clear which channel is which. 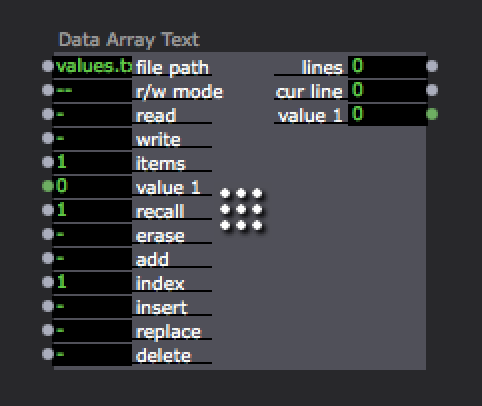 Note that this is actually a new actor that supersedes the old Data Array actor from previous versions of Isadora. The old, numbers only Data Array actor has been renamed as "Classic Data Array." This actor will still work in old patches, but it has marked as "deprecated" and will not appear in the Toolbox unless you disable the "Hide Deprecated Plugins" option in the General tab of the in the Preferences.

Every Scene now has a Cue Number in addition to a Scene Name. Naming a scene is the same as always, but you now have three options for how to assign a Cue Number to each Scene.

The next option is Manual. Under this option, you can manually give a scene a number by secondary clicking one or more selected scenes.

When set to Manual, new scenes added to the end of the scene list will be automatically numbered. If you create a new scene between two existing scenes, you will be prompted to number that new scene. Two scenes can not have the same number, but in Manual mode, scenes do not have to be ordered correctly.

When set to Automatic, Isadora automatically assigns numbers to scenes, and renumbers scenes when their order is altered. When inserting a new scene between two numbered scenes, Isadora assigns a “.5” cue number. 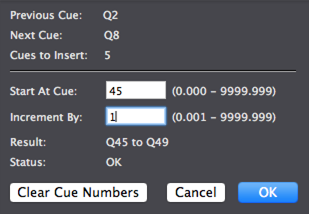 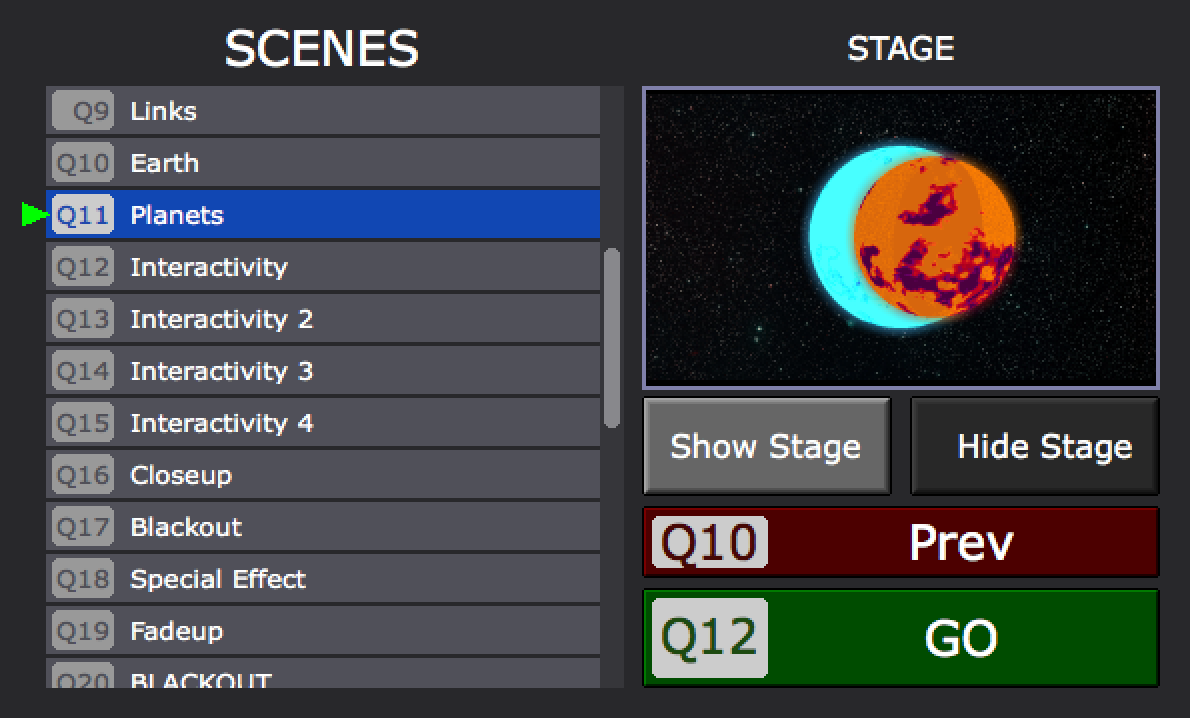 A simple, vertical scene list option is now available via the control panel. Making a simple control layout is a snap.