NOTE: This tutorial describes best practices for optimizing your computer operating system when working with Isadora software. For details about Isadora’s Preference settings and more advanced setups, please see the Isadora User Manual accessible from Menu Bar>Help>Isadora Manual... or download an offline copy of the manual.

Mission Control allows users to personalize their System Preferences with keyboard shortcuts and screen hotspots activated with a mouse or trackpad, allowing rapid access to open and hidden windows, applications and the desktop. Although these features can be useful for general computer work, the Isadora user should ensure that they memorize the keyboard shortcuts, in order not to activate them accidentally during a live performance. Alternatively they can be customized to your own shortcuts, or turned off (recommended) at  > System Preferences > Mission Control.

Isadora users should also note an important default feature in the Mission Control settings, called "Displays have separate Spaces" which ensures the Apple user will see the macOS  menu bar at the top of every monitor, display or video projector that is attached to the computer. However, this default setting will result in the macOS menu bar being visible at the top of each Stage video outputs when sent to multiple display monitors or video projectors. It is recommended to deactivate this default feature (unless this is needed for your design), by unchecking the box beside it. 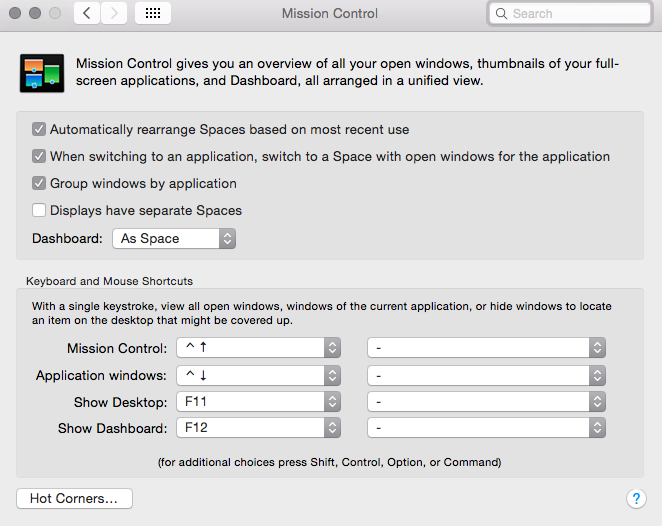 There are some situations where the "Displays have separate Spaces" feature is useful, since it allows macOS users to swipe between full screen apps and spaces on multiple monitors. However, for the majority of Isadora users it is recommended to turn these features off, to prevent accidental swipes to different application spaces, making your Stage outputs disappear.

TIP: Select a black picture file as the background image on the desktop, instead of a default macOS image, for all connected monitors and video projectors. If you accidentally activate the keyboard shortcut for Hide Stages (Command-G on macOS, Control-G on Windows) Isadora’s video output would disappear to reveal the macOS default background picture instead of your intended video output. Replacing the desktop image with a black picture, lessens the impact of this user error and is considered 'best practice' by professional designers!

Save a black .jpeg or .png file at the same resolution as your output to your Pictures Folder: Macintosh HD > User > Pictures

When using Isadora software for public shows, exhibits or installations, ensure that you turn off Apple's Screen Saver feature, as follows:

When you first connect a second monitor display or video projector the macOS system preferences are set by default to automatically ‘mirror’ the main display, in order to show the same content that appears on your main screen. However, when using Isadora you may want to send the video output of your Isadora Stages as full screen video content to multiple displays. To do so you will need to deactivate mirroring of your output displays, as follows:

You will now be able to set up Isadora’s video outputs via Stage Setup in order to send full screen outputs to your additional displays.

NOTE: the included instructions and system paths may vary between Windows versions. It is recommended that if you cannot find the described setting dialog or feature, that you use the integrated Windows search. This will generally find the options for you. If not the information is widely available online.

Windows 7 introduced Aero Snap. The feature allows for easy movement and tiling of open windows on the desktop. It can however cause your Isadora stage to minimize along with the application if the 'Windows' + 'down arrow' keys are pressed. The action is identical to the standard windows minimize feature except is activated by the key command. The other arrow key options will move your Isadora program window but do not effect the stage. It is recommended that you learn these commands, to help ensure that the stage is not accidentally minimized.

Windows 10 introduced Task View.  It is very similar in function to Apple's 'Mission Control' (or Exposé). A number of keyboard controls allow the user to switch between multiple virtual desktops. In a multi-display setup, all displays are grouped as a virtual desktop; therefore, switching between desktops will change the view on every display.

The method of switching virtual desktops requires pressing 'Windows'+ 'tab' keys (or the default taskbar icon) to open a selection interface. The interface replaces all output on all displays. This interface cannot currently be disabled. It is recommended you become familiar with this system feature.

Select a solid black for your desktop background, instead of a default system image, for all connected displays. If you accidentally activate the keyboard shortcut for Hide Stages (Control-G on Windows) Isadora’s video output would disappear to reveal the desktop image instead of your intended video output. Replacing the desktop image with a black picture, lessens the impact of this user error and is considered 'best practice' by professional designers!

When using Isadora software for public shows, exhibits or self-running installations, ensure that you turn off the Screen Saver feature of all your computer displays.

For the same reasons mentioned in the Screen Saver section above, it is advisable to turn off the Computer Sleep and Display Sleep features of your computer, as follows:

Many organizations require electrical equipment to be turned off for safety and insurance reasons when no-one is in the building. In Windows this is best accomplished using the built in 'Task Scheduler', which is a powerful system utility that can schedule many system operations. It is suggested you find a online tutorial for your specific Windows version.

You can schedule the 'Shut Down', 'Hibernate', or 'Sleep' of your system at any time, however, to wake your system using Task Scheduler, it is required to be in a 'Sleep' state (ie not fully shut down). If you are required to shut the system down completely the shut down can be handled with Task Scheduler, but the restart will need to be setup in your Bios (not all hardware supports this option).

You can view your system Bios, by rebooting, and pressing the 'Del' key when prompted, or within the first 1-3 seconds of restarting.

The section you need to find will be labelled 'Power' or 'Power Management'. Here there should be an option that references the 'RTC Alarm'. This should have an option to set a time and frequency (daily) for the system to turn on.

Since hardware varies, it is recommended that you refer to the documentation for your specific motherboard/bios.

Windows offers an interface for setting up your displays. It allows the placement of each display in respect to the others, as well as, defining the orientation and display type (extend displays, duplicate). To use a display with Isadora as a stage output it is important that the displays are setup to extend the desktop. Setting them to duplicate will not allow your stage output to target the additional display/s.

You can open the windows Display settings at: Settings > System > Display (or right click the desktop and selected 'Display Settings')

Windows applies scaling to objects displayed on High DPI displays, however Isadora will display stages without scaling. This may cause the stage to appear only partially on the display.

To correct issues with Isadora stages when using high dpi displays, you will need to: