Prior to this tutorial, you may wish to review our Quick Start Guide to Stage Setup in Isadora 3 to familiarize yourself with the basics of setting up Isadora 3 for video output.

Isadora 3 supports up to 16 video output channels, called Stages. In this tutorial, you will learn how to configure Isadora to facilitate video output for multiple displays.

What is a Display?

There is no requirement to use identical units or displays with Isadora, as the application automatically detects the resolution of each display. You could work with two different projectors plus a television set, for example. However, users interested in using Isadora’s multiple display features, such as edge blending and projection mapping may wish to consider the visual consistency offered by using identical units.

You may already be familiar with connecting a single video output to your computer, so in this section we will discuss how working with two or more video outputs simultaneously may require additional hardware considerations.

Just as with a single video output, your computer must have a video output device of some kind to connect to a display. When securely connected to your computer, Isadora will “see” this display automatically. The most ubiquitous types of video output connections today are VGA, HDMI, and DVI.

Most laptops only support a single video output without additional hardware. However, a notable exception to this is the Apple 15” Macbook Pro with Retina Display, which can support up to three video outputs on its own. Apple’s powerful Mac Pro desktop units are also equipped with six Thunderbolt ports, although Apple’s specifications note that the machine can only support output to a maximum of three displays at a time. 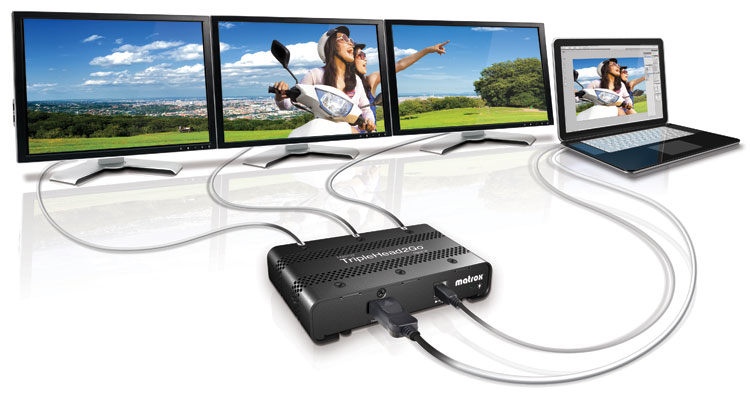 Many users ask if there is some way to “split” the video outputs to operate more then one display on a laptop or machine with only one output. We recommend such users consider the Matrox DualHead2Go or TripleHead2Go, which facilitate additional displays. Later in this tutorial, we will discuss how Isadora includes additional options that make working with a DualHead or TripleHead easy.

It is technically possible to combine a TripleHead with the additional outputs on a 15” Retina Mac to output four or more displays. However, depending on your design, this may tax the limitations of your machine. We recommend users operating more then three displays from a single computer consider a powerful desktop solution instead of a laptop.

Desktop PCs can be built with a wide range of dedicated graphics cards, which may support a variable number of outputs. The number of physical ports on a graphics card may not be an indicator for how many displays it can actually support, however. Careful research is required when purchasing a graphics card to ensure it can support the number of displays you require!

Note — If you are using a Matrox TripleHead or DualHead, follow the instructions from Matrox to configure the device and connect your displays before starting these steps.

Optional: Hiding the Menu Bar on additional displays in macOS

In newer versions of OS X, Apple may show the Dock and Menu bar on each display. Unfortunately, this causes the menu bar to overlay Isadora’s stage output, and is quite unsightly. However, it is easily corrected:

The order of the stage list is important! Stages are automatically numbered sequentially, starting from “1”. Drag stages within the Stage List to change the Stage Number.

Actors and preferences refer to stages using a stage number. For example, the Projector actor uses the stage number as the value in the ‘stage’ input property to determine where it will output video.
NOTE: to drag, click and hold the mouse button until the cursor changes into a closed hand icon ; this slight delay is used throughout Isadora to prevent accidental drags during a show.)

For users working with a Matrox TripleHead or DualHead only:

You’ll notice that you don’t have many options under the Display Select drop-down menu in Step 5: your computer thinks the three beamers connected to the Matrox device are one long display. Isadora includes a special feature here just for users like you which helps “split” this display back into its discrete parts.

Note how the "split" drop down menu that is set to “Full” by default. Within this drop down, you can configure Isadora to only use one-half or one third of the display as a stage: 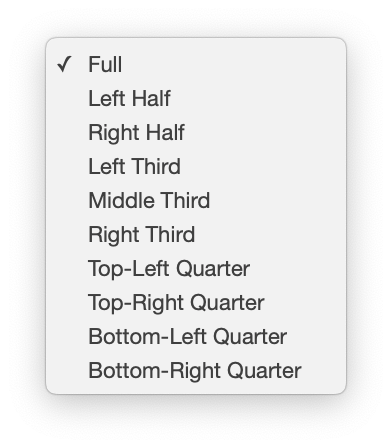 When using a Matrox DualHead, set Stage 1 to the Left Half, and Stage 2 to the Right Half. Make sure the drop down option for “Split” is set to the same display for both stages.

When using a Matrox TripleHead, set Stage 1 to the Left Third, Stage 2 to the Mid. Third, and Stage 3 to the Right Third. Make sure the drop down option for “Split” is set to the same display for all three stages.

This feature is designed for the unique way the Matrox products work. Since your computer recognizes a Matrox triple head not as three distinct displays, but as one “extra-long” display, this feature allows you to treat the displays as discrete entities within Isadora. It is essential that you “divide” your display to properly use the TripleHead or DualHead!

Now that you have configured your stages, let's try making a simple patch to test the configuration and learn how to use multiple stages in the Scene Editor.

Many other actors use the Stage output to determine the destination stage for the video stream received by that actor. Each actor works on the same premise: simply change the number on the “stage” input property to the corresponding stage you wish to send the video output.