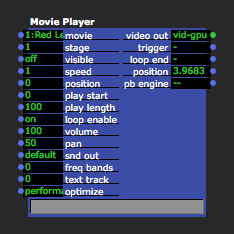 Important Note for Isadora v1 Users: when you open a file created with Isadora v1 in Isadora 2.0, the Movie Player actors will be automatically be renamed to Classic Movie Player. The Classic Movie Player still uses the old playback engine to maintain compatibility with older patches. You will not see the performance gains listed above if you use this the classic version of this actor! Also take note of the new names for the various kinds of video streams below.

Unlike the classic Movie Player in Isadora v1, Movie Player 2.0 has a mutable output; it can produce any of the three possible video formats supported by Isadora 2.0:

The mutable output of the new Movie Player makes it easy to work with Isadora's other video related actors. If you want to process the image using a FreeFrame GL effect the output format is already vid-gpu. But, if you need to use a classic Isadora effect which requires vid-cpu, just connect the Movie Player's output to the effect's input: it will automatically change to vid-cpu. The same goes for any Core Image related plugins; just connect and the output of Movie Player 2.0 becomes vid-ci.

However, there is a now slight performance penalty when using vid-cpu with Movie Player 2.0. Movie Player 2.0 always decodes the video stream to the graphics card/GPU first, regardless of the output setting. Isadora must move the image from the GPU to the main processor's RAM before it can output a vid-cpu video stream. For this reason, you should always choose vid-gpu for new patches unless you absolutely require vid-cpu. (One obvious place where you must use vid-cpu is if you wish to do interactive tracking using the Eyes or Eyes++ actors.)

Isadora v1 used Apple's QuickTime to play video on both Macintosh and Windows. Now, with Movie Player 2.0, the default playback engine will be AVFoundation on Mac OS X, and DirectShow on Windows. The advantage of using these system is speed: you can play more high-resolution clips at the same time than you can with QuickTime.

That's where the optimize input comes in. If you leave it set to performance (the default) Isadora will attempt to use AVFoundation or DirectShow if possible. But if you set the 'optimize' input to interaction then Isadora will use QuickTime if possible.

Here is a list of file formats supported by each playback system:

** When you transition from one scene to the next, Isadora must preload all of the movies in the next scene before it can actually tell them to play and jump to the next scene. Preloading has never been instantaneous. But AVFoundation performs less well than it's counterparts in this regard; this is something we are very actively seeking to improve. However, as with Isadora v1, you may still use the Preload Scene actor to preload the scene before you need to jump. If you do this, the jump will be nearly instantaneous.

*** AVFoundation has a feature that attempts to correct the pitch of a movie when you played it slower or faster than normal speed. QuickTime does not uses this algorithm, so in Isadora v1, when you changed the speed of the movie, the pitch of the sound changed too. Unfortunately, the ability to disable the pitch correction feature was added only in Mac OS 10.9. So, when changing the speed of movies in 10.8, you will hear the pitch corrected result, not the changing pitch as found in Isadora v1.