These actors are exceptionally useful when you need a specific video or audio asset to play consistently across several scenes without interruption. It’s also a great method to facilitate unbroken communication between sensor data and generated effects (such as ArtNet communications or Kinect sensor data) as your move from one scene to the next. Finally, activating and deactivating scenes is an effective way for interactive pieces to combine complex effects and user actors on-demand without taxing your computer’s resources. Instead of building a complex patch with myriad user actors into a single scene, each component can be moved into its own scene and activated only when needed by the project.

How does it work? The Activate Scene actor allows you to activate a “secondary” scene in addition to the current “primary" scene. This secondary scene remains active until it is deactivated using a Deactivate Scene actor.

The primary scene is illuminated in the Scene List in dark blue with a green line beneath it; other active secondary scenes are illuminated in a light blue.

Isadora does not limit how many secondary scenes you can have active at a time, but each active scene uses computer resources as normal.

You cannot activate the current primary scene, however, it is possible to deactivate it. Activating a scene that is already active does not reset the scene, nor does it activate a duplicate.

For this reason, it’s important to ensure that your scene list is carefully organized so that the project will not accidentally transition into a scene you want to remain active. As a best practice, we recommend placing scenes you plan to activate or deactivate at the beginning of the Scene List, followed by a blackout scene and then a “pre-show” or opening state scene. When you operate your project, manually skipping past these scenes prior to the start of the performance. If you later reorder your scenes, this ensures activated scenes remain a fixed position in the Scene List so there is no chance an operator will transition into them. This also retains the scenes relative position in the scene list, as opposed to placing the Activated scenes at the end of your project, which may later require updating the individual Activate Scene actors if more scenes are later added to your project.

Therefore, planning a project using Activate Scene requires some careful thinking ahead. In this example, we’ll show you how to think about organizing your scenes while we learn how to use the Activate Scene and Deactivate Scene actors.

Suppose we have a single piece of music we wish to play, but the video changes between several images. While we will be transitioning through several video cues, but we want the audio track to proceed unbroken. We can’t use a pre-recorded sequence because the exact timing of the video transitions needs to be manually triggered, but the music must continue separately. This is a relatively common scenario in many media-heavy works, and the Activate Scene actor is the perfect solution.

To begin, you’ll need the following media files from your own collection:

At this point, we’ve created the simplest set of Isadora cues. Your scene list should look something like this: 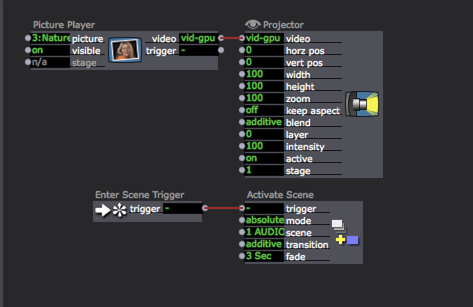 NOTE: The Deactivate Scene actor isn’t “intelligent”. It can’t detect active scenes automatically, nor does it actually matter if the scene it’s deactivating actually is active or not. Thus, you need to carefully plan ahead and carefully instruct deactivate scene actors appropriately. Otherwise, activated scenes simply remain on indefinitely.

Starting at the PRESHOW scene, run through your project. You’ll notice that when you go into VIDEO 1, the AUDIO scene activates as well.

Press the space bar to transition from one scene to the next. As you do, the AUDIO scene remains active and the music continues to play, but the video images change on-demand.

Once you reach the OUT scene, the AUDIO scene fades out:

We can also communicate between two active scenes using the Broadcaster actor (to send information) and the Listener actor (to receive it). This is useful if you want to alter the actor properties in an active scene, or to use data collected in the secondary scene to power effects or manipulate actors in the primary scene.

NOTE: All Listener and Broadcaster actors you want to share information between must be set to the same ‘channel’. Remember to use different ‘channel’ numbers if you are working with multiple different input/ output pairings at once.

NOTE: The Broadcaster actor only transmits new data when the value is updated. If you wanted to alter the volume as we moved from scene to scene, we’d need to use a Trigger Value and Enter Scene Triggers to pass new values to the Broadcaster. You must also set the ‘initialize’ function of the ‘value’ property to a value that is not equal to the value being received from the Trigger Value actor. Simply placing a Broadcaster actor in each scene with the new values won’t pass the new values.