How to Use a Mobile Phone as a Live Input for Isadora! Print

Mobile devices are the definitive everyday technology, and many artists are integrating smartphones in their performance and installation works. This tutorial demonstrates how  to get a live feed from a mobile device camera or display into Isadora wirelessly!

We will be taking advantage of the built-in features in iOS and Android which support wirelessly streaming video from your device to a receiver. Typically, this feature is used with platforms such as an AppleTV or a Google Chromecast. However, a few clever desktop-based applications can also receive the stream, which can then be picked up by Isadora via Syphon.

At the end of this article, we have also included a few best practices for working with mobile wireless devices.

Warning! Every time we have used a mobile phone in a performance, it has been dropped at some point during rehearsal or the run. It is basically inevitable. Although smartphones case are very strong, we have seen devices break even with the toughest protective cases. If possible, have a second mobile phone on site as a backup device. Having only one phone for your project is an invitation for someone to drop and shatter it.

Available at http://www.kinoni.com/ and the iOS App Store/ Google Play

Price: approximately $5.99. The paid version is necessary for a Syphon feed.

EpocCam streams the camera feed from your mobile device. The video received is “clean”, which means it’s stripped away of any interface elements. The application is a perfect solution for handheld live camera work. Even more, EpocCam supports up to four simultaneous camera feeds.

However, application requires a few moments to connect properly. If disconnected, the application needs to be restarted.

EpocCam requires you to purchase and install the EpocCam HD app on your mobile device.

You will also need to install the EpocCam Viewer Pro application on your computer. It is available at http://www.kinoni.com/

AirServer streams the display of your smartphone, which allows virtually any mobile app — such as a game, text messaging application, or web site — to be used as a video source. Note that when you use AirServer with the default camera app on a smartphone, you will see the “interface” elements of the camera feed in the video stream.

We have found AirServer to provide an extremely reliable and quick connection, but only supports one feed at a time.

AirServer utilizes the built-in screen casting features of your mobile device, so you do not need to install any additional applications on your smartphone. You should make sure you are using an up-to-date version of your smartphone operating system.

AirServer requires you download and install AirServer on your computer. You can find AirServer here:

1) Verify that your computer and your mobile device are correctly connected to the same wireless network.

2) Launch the EpocCam Viewer Pro desktop app. A black window will appear, which displays your network name in the bottom left hand corner: 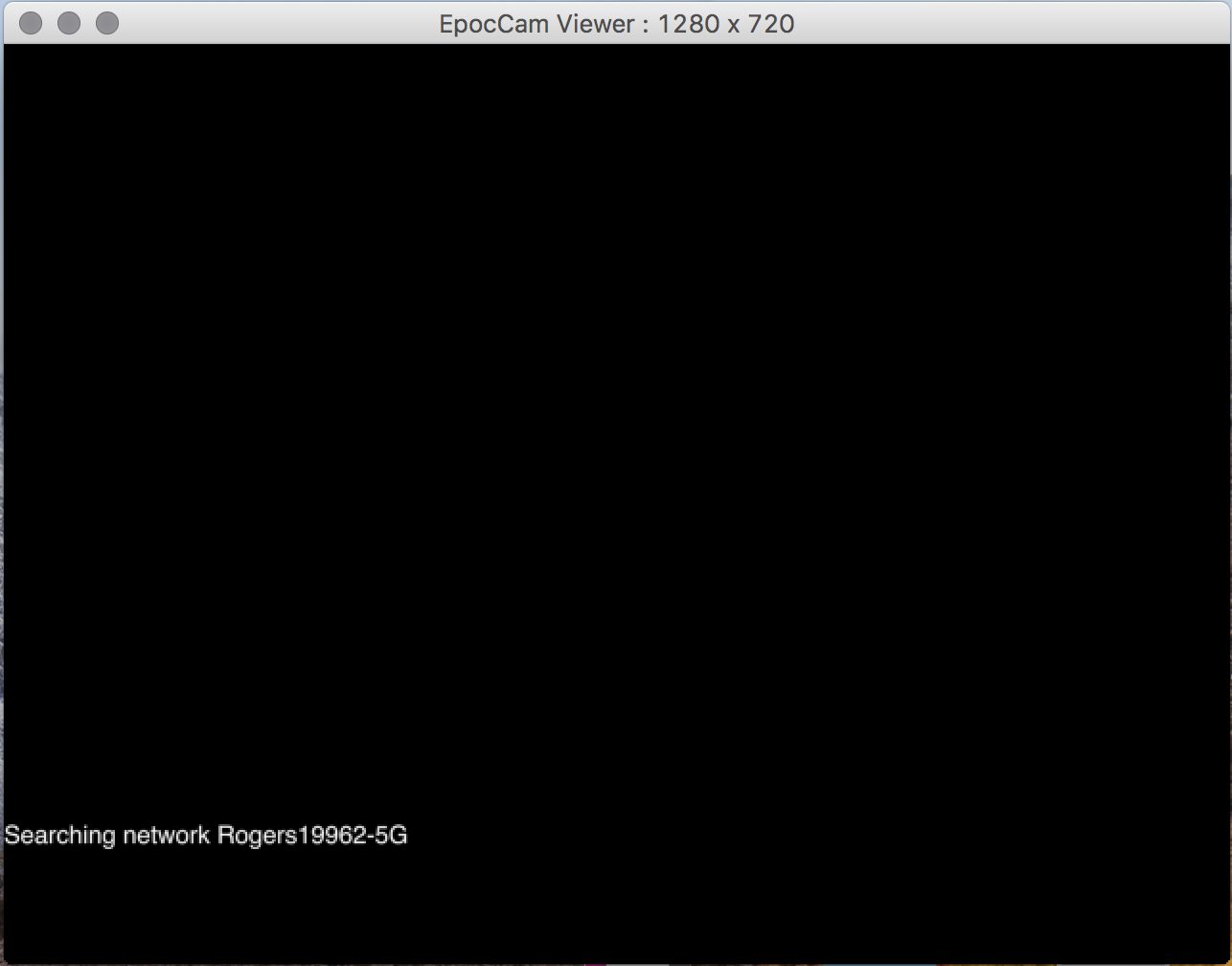 3) Verify that the network listed in the bottom corner is the correct wireless network you wish to use.

4) Launch the EpocCam HD App on your smartphone. You’ll see this on the screen of your device. 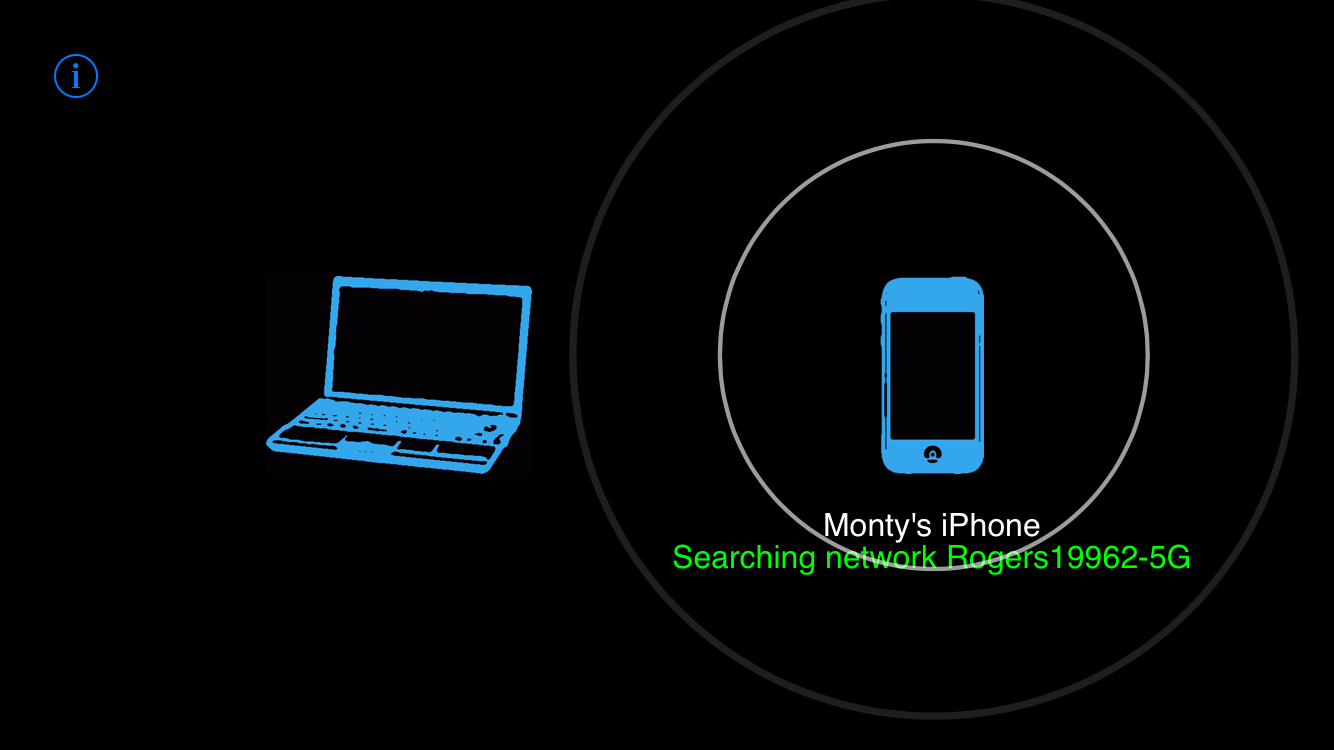 5) Note that the screen displays both the name of your mobile device, and the name of the wireless network.

8) Add the Syphon Receiver actor to your Isadora scene:

10) You’ll see at least four options: Cam 1 thru Cam 4. Since we are only using one device, choose "Cam 1". If you are using more than one device, EpocCam assigns them camera numbers in the order they are connected. You will need to have once unique Syphon Receiver for each camera feed.

11) Add a Projector actor to your scene.

12) Connect the 'video' output of the Syphon Receiver to the 'video' input of the Projector actor, or combine with other actors to produce unique effects!

1) Verify that your computer and your mobile device are correctly connected to the same wireless network.

2) Launch the AirServer desktop app. Note that no window appears for AirServer: the application appears in the System Tray instead. You can access AirServer’s preferences from this system tray icon.

3) Swipe up from the bottom of the screen to reveal the Control Centre. This gesture can be a little difficult to perform, the key is to start with your finger OFF the screen! 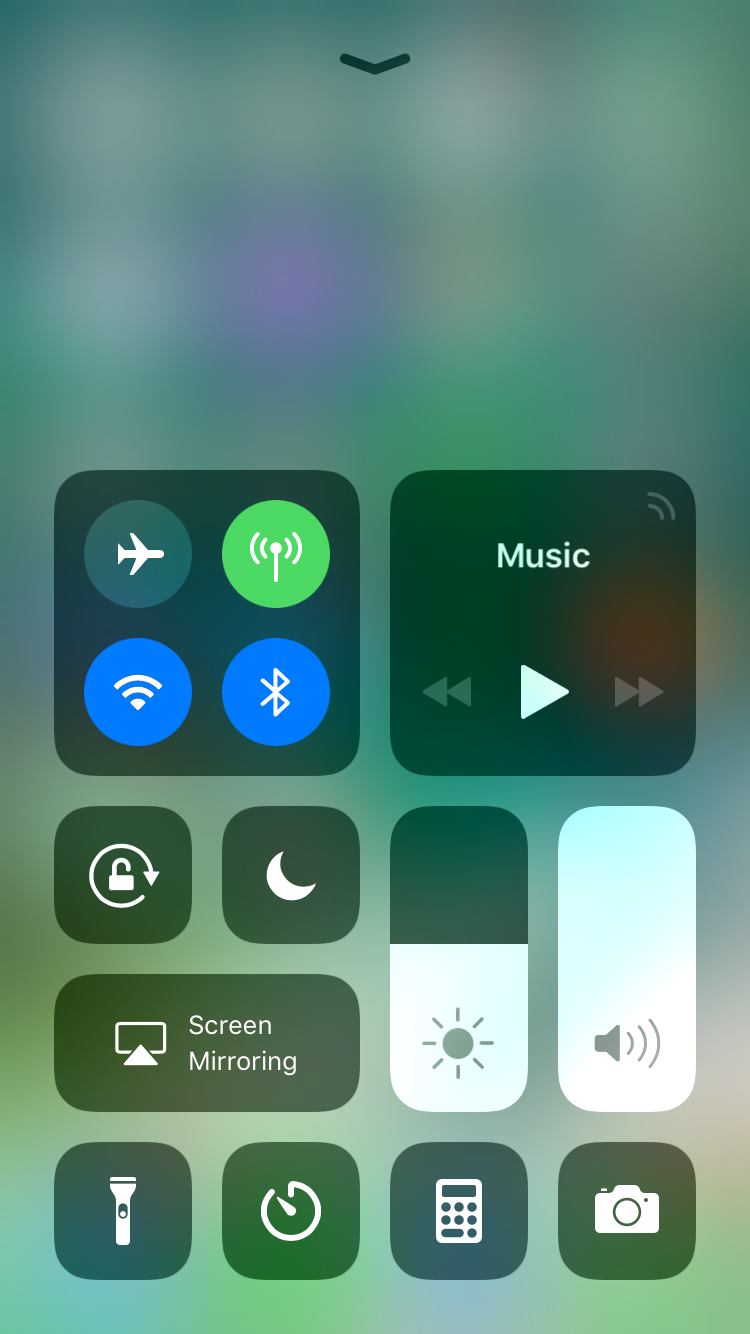 Note for iPhone X users: You’ll need to swipe down from the upper-right corner of the screen to access the Control Center instead. 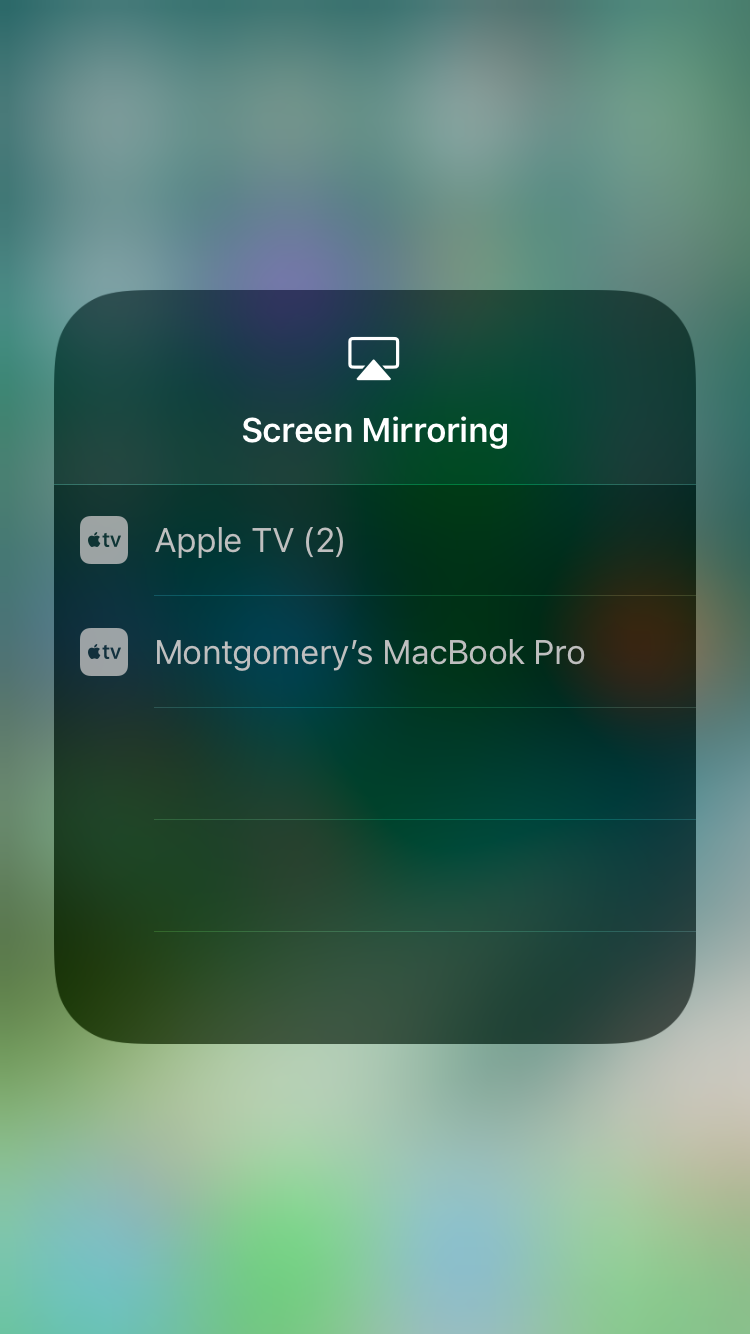 5) This menu lists all the AirPlay devices your mobile phone has detected on the network. You should see at least one option: your computer. In the above image, we have two options: an Apple TV and a computer, which are both on the same network.

6) Select the option for your computer. After a moment, a check mark appears. 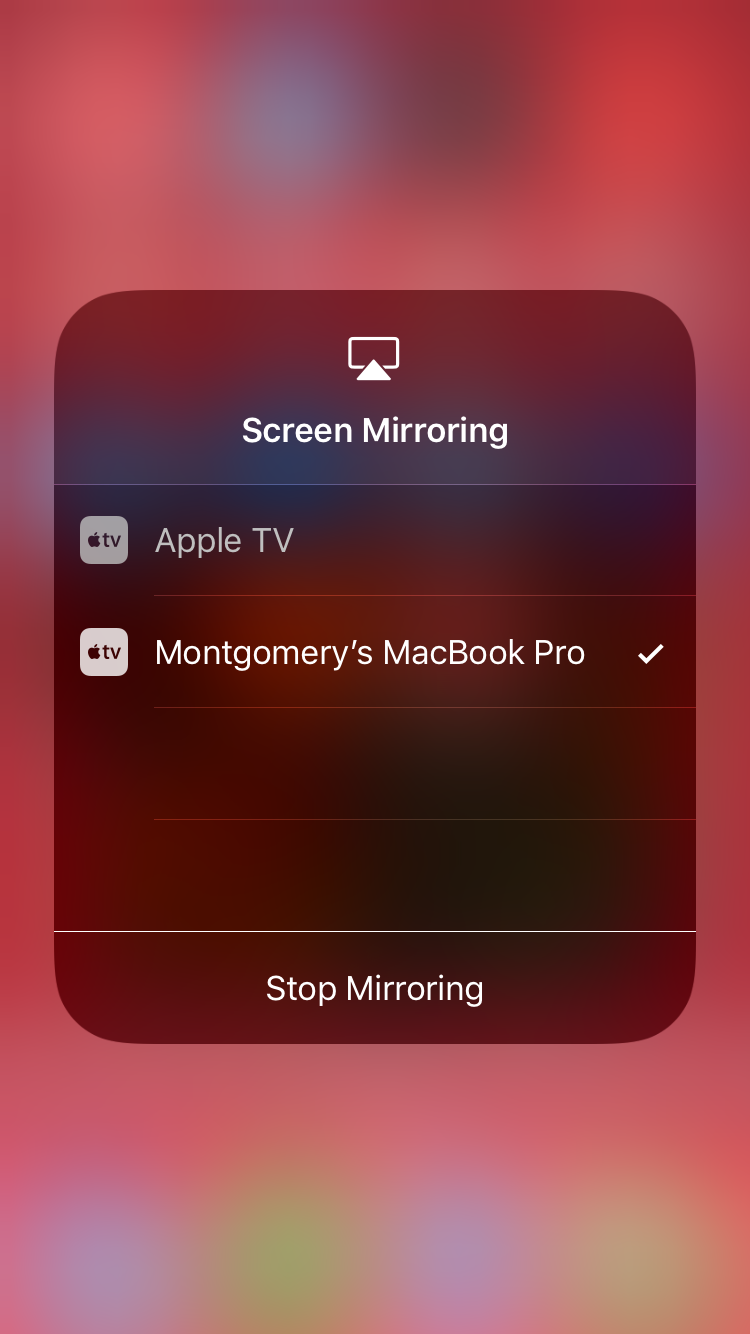 7) A new window will appear on your computer’s desktop, showing the display of your smartphone. You can now leave the Control Centre and operate your mobile device normally. To stop mirroring, you will need to return to the Control Centre screen mirroring settings and choose the “Stop Mirroring” option which now appears there.

9) Add the Syphon Receiver actor to your Isadora patch

11) You’ll see an option which says something like “User’s iPhone” followed by the resolution and “AirServer”. Choose it.

12) Add a Projector actor to your scene. Then connect the “video” output of the “Syphon Receiver” to the video input of the Projector actor, or combine with other actors to produce unique effects!

One of the largest risks when using a mobile device in a live performance are all the buttons, beeps, and other system features which can impact the performance. Whenever possible, do not use a personal mobile device for a live performance (unless, of course, that’s exactly the point!). If the device does not need to perform it’s usual communication functions as part of your piece, we recommend removing the SIM card and signing out of any e-mail or messaging accounts so that unwanted notifications do not appear on the device. However, there’s a few extra steps you can perform to ensure smooth operation.

As part of their default power-saving settings, most mobile devices automatically go into sleep mode after 30 seconds to 5 minutes of idle time. However, the connection to Epoccam and AirServer may be interrupted should your device go into sleep mode. If this happens, it can be necessary to re-set the connection. This can be time consuming in the middle of a performance work, so it is strongly recommended that you disable the auto-sleep or auto-lock functions on your show device.

This will prevent the device from going to sleep entirely.

Many android devices unfortunately do not include a “never” option. The longest is 10 minutes.

Note that disabling screen timeout or auto look will drastically decrease the battery life of the device. Most smartphones can hold a full charge while their screen is lit for at least an hour, but older devices or large-screen devices may need to be recharged swiftly.

Even when a mobile device is set to never go into sleep mode, all mobile devices include sleep/ wake buttons, home buttons, back buttons, volume buttons, ect which can accidentally leave the app you wish to display, put the device to sleep, or cause undesired interface elements to appear on screen. While it’s possible to train a performer to exercise care not to press these buttons, in practice this is much more difficult! Fortunately, iOS devices devices include “kiosk” modes which lock the device into a particular app and disable many of the buttons on the device.

iOS calls its “kiosk” mode “Guided Access”.  When activated, Guided Access mode allows you to temporarily restrict iOS to a single app, disable buttons on the device, and even disable areas of the screen. This is a great way to ensure a performer doesn't accidentally exit an application or perform an unwanted function.

Tap Settings > General > Accessibility > Guided Access to set up Guided Access. From there, here's what you can do:

Running the camera and screen consistently on a smartphone rapidly drains battery life. As part of your pre-show and post-show checklists, make sure the devices are connected to a power source and fully charged.

Transmitting a video feed from your mobile phone wirelessly during a live performance is a risky task. Carefully test your wireless network to determine the best configuration for your project. However, here are a few best practices: