You use Stage Setup to assign displays connected to your computer to stages, blend video output across multiple displays by combining them into a single stage, and create virtual stages which are not assigned to a physical display.

You may close the Stage Setup window at any time. Changes are automatically saved and applied as they are made.

NOTE: Unlike the Stage Preferences found in prior versions of Isadora, a Stage Setup configuration is specific to an Isadora document, and is not applied globally to all files opened in Isadora 3. 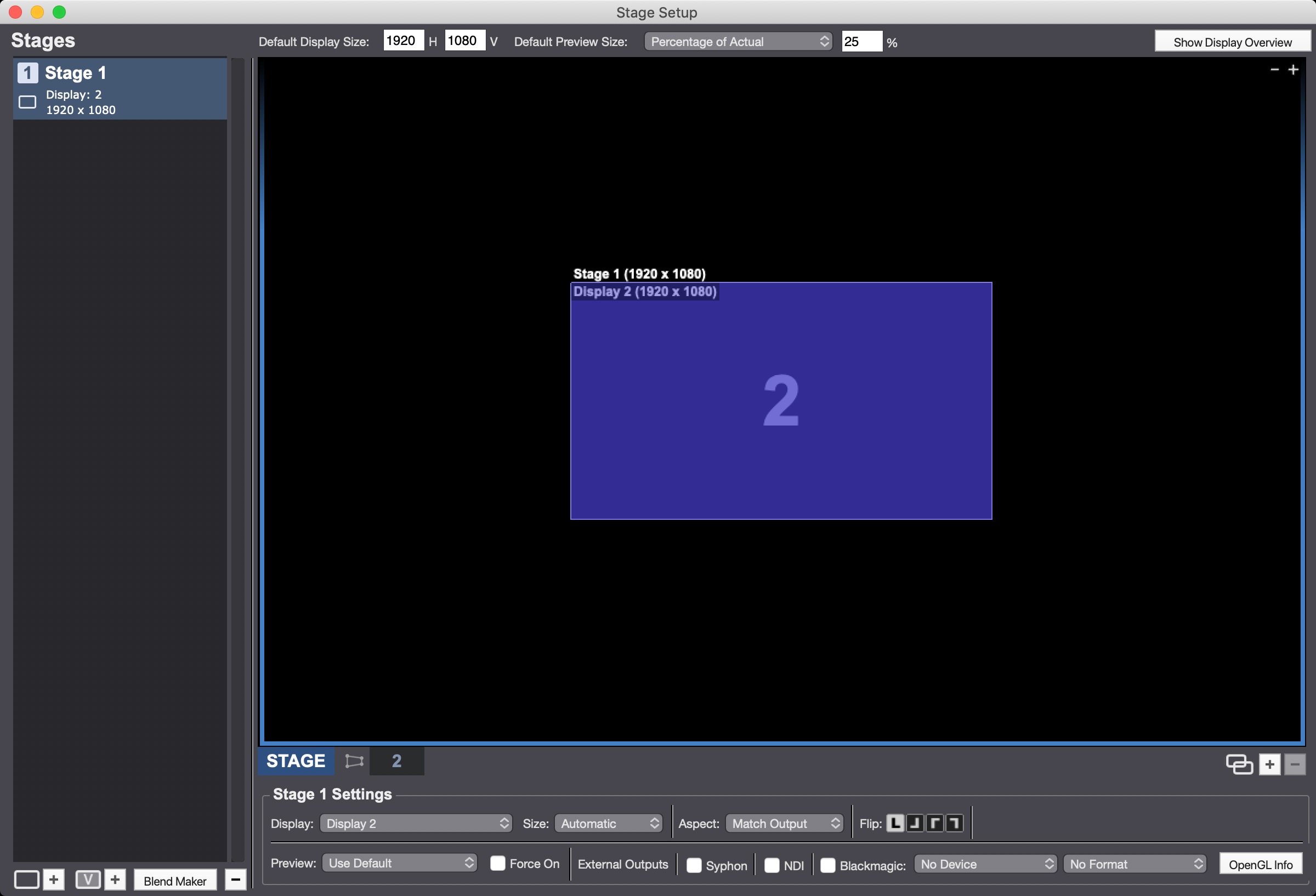 Isadora features extremely flexible control of video output. You can send the same video to multiple projectors simultaneously, or show a different video on each, composite several videos together, or any combination in between.

A display is any digital projector, screen, monitor, television set, or other video hardware connected to your computer.

Isadora 3 can address up to 16 connected displays. However, the number of discrete displays which can be connected to your computer is also affected by your hardware specifications.

Actors and preferences refer to stages using a stage number. For example, the Projector actor uses the stage number as the value in the ‘stage’ input property to determine where it will output video.

Isadora 3 supports up to 48 stages. However, the total number of active stages your computer can support is also affected by your hardware specifications.

Multiple displays may be assigned to a single stage so that they can all be addressed as one. However, each display should only be assigned to one stage at a time. Refer to the article on “Working with Multiple Displays” for details.

The built-in screen on a laptop computer or the monitor of a desktop system is often used for control and editing purposes, rather than video output, and appears as Display 1 (the “main display”). Isadora automatically skips using this display for stage assignments unless the maximum number of displays has been reached. You can manually assign this display to stages, but doing so may obscure your computer desktop when the stage is displayed. Remember, you can use a keyboard shortcut to show or hide the stages (Command-G on macOS or Ctrl+G on Windows).

Virtual Stages are stages without any corresponding displays. Virtual Stages work exactly like a stage: it receives video and have a stage number, but there is no actual video output hardware associated with it.

Virtual Stages are useful in a number of situations. The most obvious is when you want to output directly to the Syphon, Spout, or NDI inter-application video sharing systems, but you don't want that image to be rendered to a video projector or display. But you can also use a Virtual Stage to render multiple several video streams, and bring that composited image back into your patch using the Get Stage Image actor.

To assign displays to stages, choose Output > Stage Setup… from the menu along the top of your display. The Stage Setup window appears: 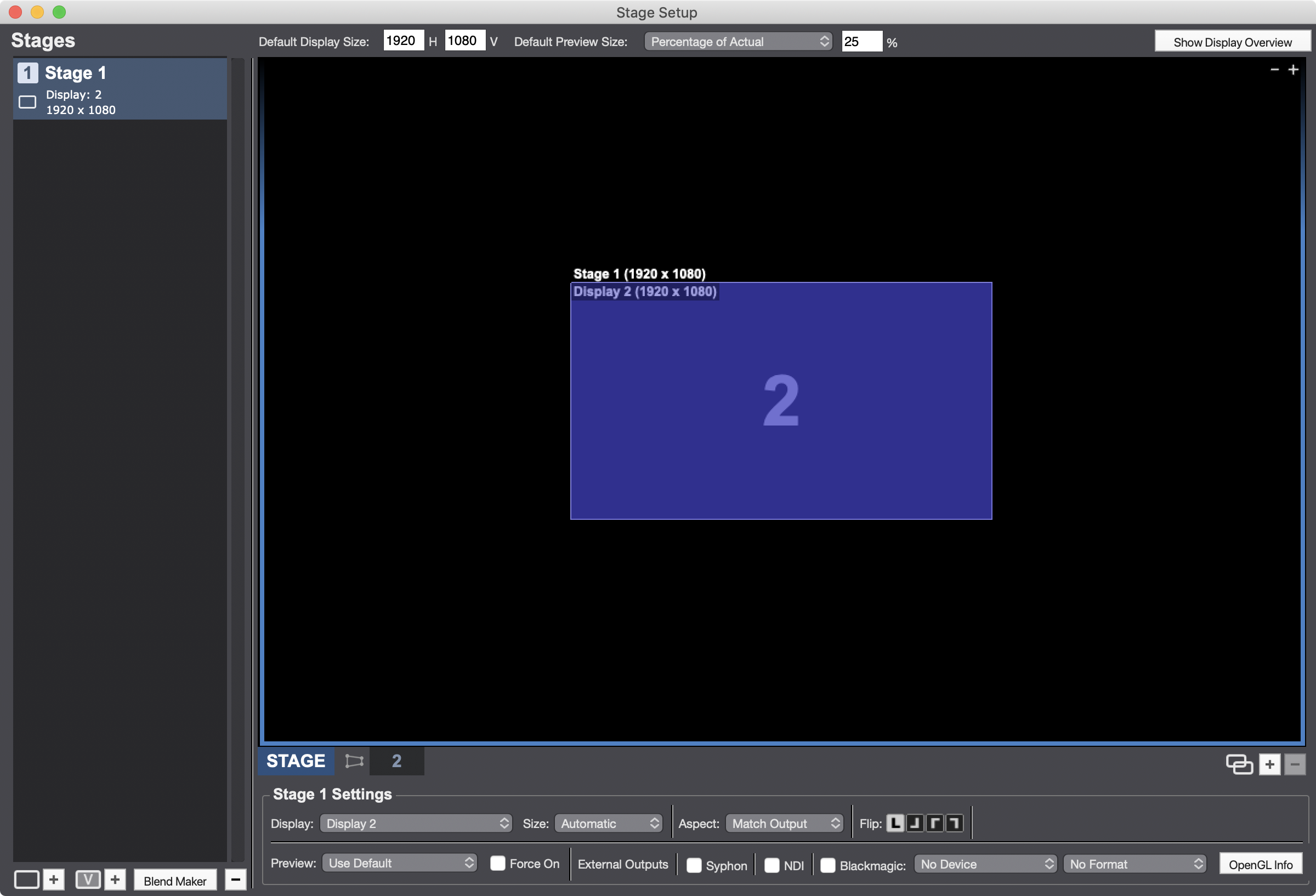 A new Isadora document contains a single stage, which can be seen in the list of Stages seen along the left side of the window.

The number inside the rectangle is the stage number, which is referenced by the 'stage' input property available in various Isadora actors (modules). To the right of that is the stage name. Below that you can see the displays assigned to this stage, and the Stage's resolution.

The visual representation of this stage is show in the Stage Layout Editor, which is the large area to the right of the list of Stages. Here you can see the Stage and its resolution, along with the displays associated with this stage.

Typically, one stage is needed for each video projector or display you wish to use for video output.

Pro Tip: Use the Tooltips!

The interface items that allow you to change a setting (i.e., buttons, checkboxes, drop-down menus, etc.) will show a "tooltip" if you hover your mouse over them for a moment. Looking at these tooltips as you explore the Stage Setup window will help you learn what each user interface item does more quickly.

Each Stage and Display has its own settings.

You add additional stages by clicking the “Add New Stage” button found in the bottom-most left corner of the Stage Setup window. This new stage is added and automatically assigned to the next available display.

To change which display is assigned to a Stage:

When creating a new stage or changing an assigned display, the stage resolution is determined automatically using the resolution of the corresponding display. However, if a display is not connected to your computer, the default resolution (1920 x 1080) is used.

You can close the Stage Setup window at any time. Your changes are automatically saved and applied.

The order of the stage list is important! Stages are automatically numbered sequentially from top to bottom, starting from “1”. Drag stages up and down within the Stage List to change the stage number.

NOTE: to drag, click and hold the mouse button until the cursor changes into a closed hand icon; this slight delay is used throughout Isadora to prevent accidental drags during a show.)

Once you've prepared your Stages in Stage Setup, you'll be ready to show them on the video projectors or displays connected to your computer. Here's how.

When you start up Isadora, the stage outputs are not automatically shown. Here's how to show and hide Isadora's stage outputs:

If a scene doesn’t have any actors rendering video (such as an active Movie Player connected to a Projector actor), the stage output will be empty, i.e., black!

To see a preview of your stages:

To go back to your full-screen stages:

The shortcut for the Force Stage Preview command is Command-Shift-F on macOS and Control-Shift-F on Windows. This is also a good one to memorize as you'll end up using it frequently.

How to Always Show a Preview

Normally, all preview stages are hidden when you go full screen with your stages. To force a preview window to always be shown: