NOTE: These instructions are for Isadora 3.

As of Zoom version 5.0.2 there is no built-in method of connecting an Isadora video output as a source in Zoom.

This article will show you how to connect setup Isadora as a video source in Zoom on the PC (currently this is a PC only solution.)

An alternative method exists and is outlined here, however; for PC users this article covers a more efficient method.

The method used to share the video output of an Isadora stage with Zoom as a video source is to use a third software as a middleware.

The software we will use is called Spout Cam. It is included with the Spout2 distribution.

The most current Spout distribution is available from GitHub. It is listed under latest release and contained in a Zip file.

Do not download the 'Source code' packages listed alongside the release. (You can learn more about Spout on their official site.)

Once downloaded, open the zip file, and install Spout by running the included executable.

When you get to the window that says “Select Components”, make sure that the SpoutCam option is checked.

Spout cam will be located by default at C:\Program Files (x86)\Spout2\SPOUTCAM. The folder will include some short documentation that is worth reading.

Also included in this folder is click SpoutCamSettings.exe this program allows you to modify the default video size Spout

Cam will work with. It is recommended you run click SpoutCamSettings.exe and set the Starting Resolution drop-down menu to 1920x1080 (or your intended project size). 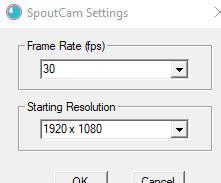 Spout Cam will be registered as a system camera on your PC and will be available within any applications that allow you to select a webcam as an input. Now that Spout Cam is installed and configured. We can configure Isadora.

Open Stage setup and check 'Spout' for the stage you want available in Zoom.

By checking the Spout option located along the bottom of the Stage setup window you are making the stage image available to any application which supports Spout. 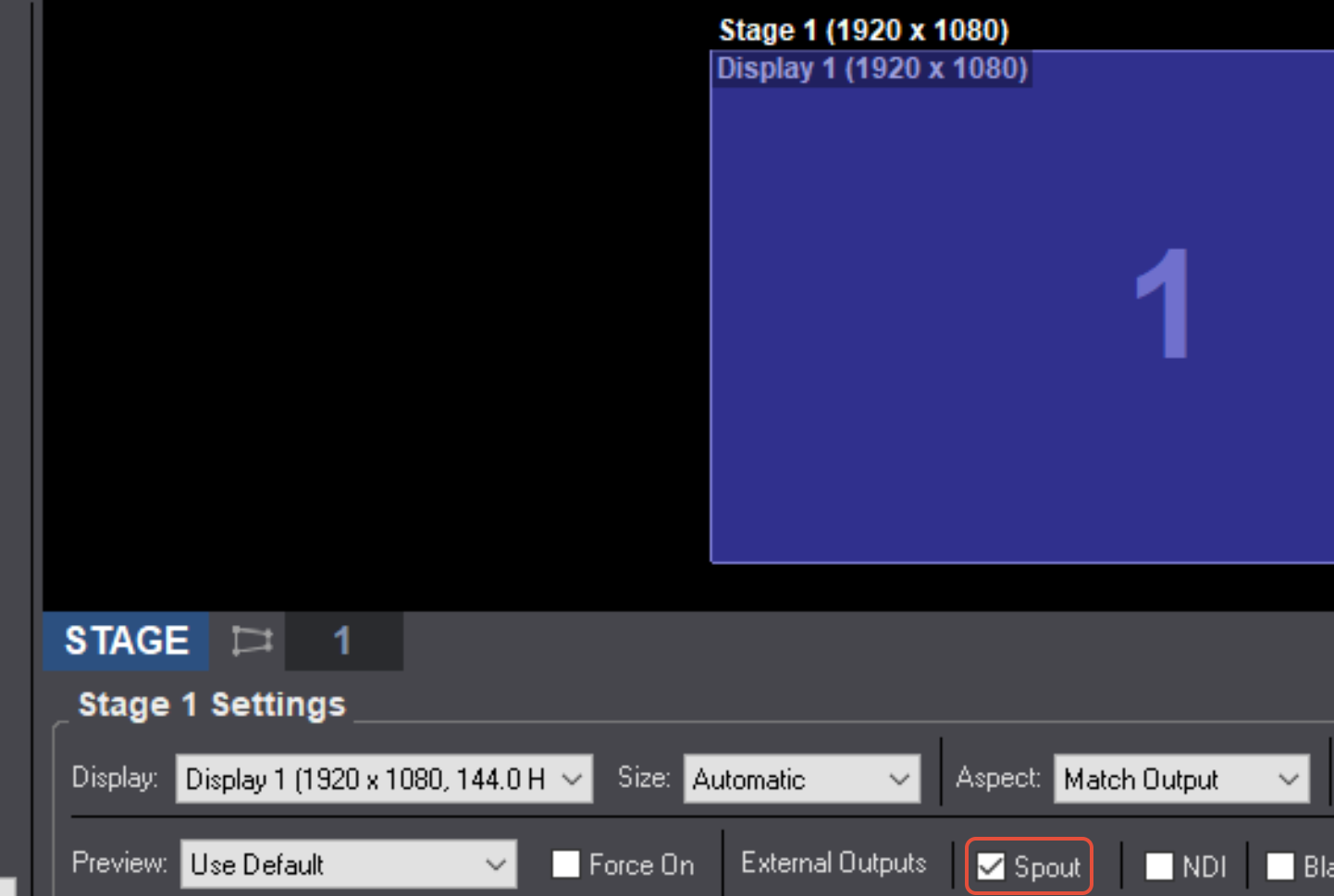 Now the Isadora stage is being shared as a Spout feed, and is available to any Spout enabled applications.

So next we will us Spout Cam to bring the video into Zoom.

Open Zoom, select 'New Meeting' or 'Join' to be added to a currently available meeting. 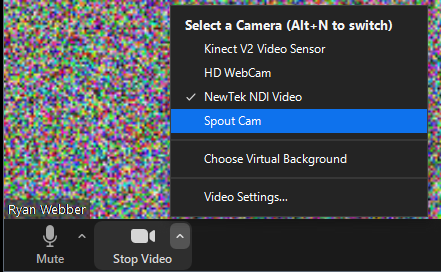 Next to the Video select button, is the Audio select button. The Stage from Isadora being shared via Spout will not include Audio.

Depending on how you want your audio source to be supplied you may need to select a local microphone, or a virtual audio cable (requires additional 3rd party software).

Congratulations, you should have your Isadora stage video appearing in Zoom.

PC's that have more than one video card, including Laptops that include a dedicated graphics card and an Intel onboard graphics chip, will run into problems sharing video between applications that are utilizing different GPU's.

Laptops with multiple GPU's will often include power-saving features that try to switch between the GPU's in an effort to save energy.

This 'switching' or 'sharing' across GPU's will not work with Spout and will raise an 'InterOP' error.

The solution is simple.

So you will need to set Zoom to use the dedicated graphics card as well.

This article describes how to set Isadora up to use the dedicated graphics card, you will need to do the same thing for Zoom.

Using Spout Cam is generally very easy. Set a stage to output to Spout, and then select Spout Cam as an input in another application, that's it; however, if you are running any more complex Isadora environments that utilize Spout for communication with other applications, it can become important to understand how Spout Cam selects its source for sharing.

There is no option for setting the video source for Spout Cam, instead, Spout Cam automatically connects to the most recently created Spout stream.

In Isadora when using the built-in Spout functionality activated in the Stage setup window, the stage with the highest number (located bottom of the Stages list, left side) with Spout checked/on, will be activated last.

Spout Cam will grab the Spout enabled Stage with the highest number, at the time the Spout Cam connection is created in the host program (Zoom in this case).

Only one stage can be sent to Spout Cam and it can't be changed within the software once connected.

Take some care in ensuring your Spout source always connects as expected to Spout Cam.